This refers to your letter dated Oct. 22, 2014, clarifying the issues of the complainant pointed out in Transparency International-Pakistan’s (TIP) letter to the National Accountability Bureau (NAB) on Oct. 9, 2014.

TIP’s concerns relate to the implementation of Supreme Court orders: recovery of dues, and inquiry into the matter by the FIA to identify all those responsible for alleged failings, including acts of criminal negligence, corruption, corrupt practices, and other offences.

In its letter dated Oct. 22, 2014, JJVL has stated that SSGC, FIA and JJVL have complied with the Supreme Court of Pakistan’s judgment. Dues of Rs. 4.258 billion to be paid by JJVL to SSGC—as determined by the Committee, comprising an ex-member of OGRA and a senior partner of A. F. Ferguson & Co., formed by the Supreme Court—have already been settled, thus there is no default on the part of JJVL, which shall also pay the invoice for freight charges once the final invoice is issued by SSGC.

Also, the FIA has submitted its report to the Supreme Court, CMA 947 of Feb. 21, 2014, in which it is stated that no criminal intent, or mala fides, negligence, corruption, corrupt practices or any kickbacks were found. SSGC, the invoice settlements, and the FIA report filed with the Supreme Court confirm JJVL’s clarifications.

TIP has nothing against JJVL or SSGC. Given the compliance of the Supreme Court orders, as clarified in your letter dated Oct. 22, 2014, the complaint received by TIP appears to be contradictory to the facts.

I hope this clarifies the concern shown in your letter under reply. 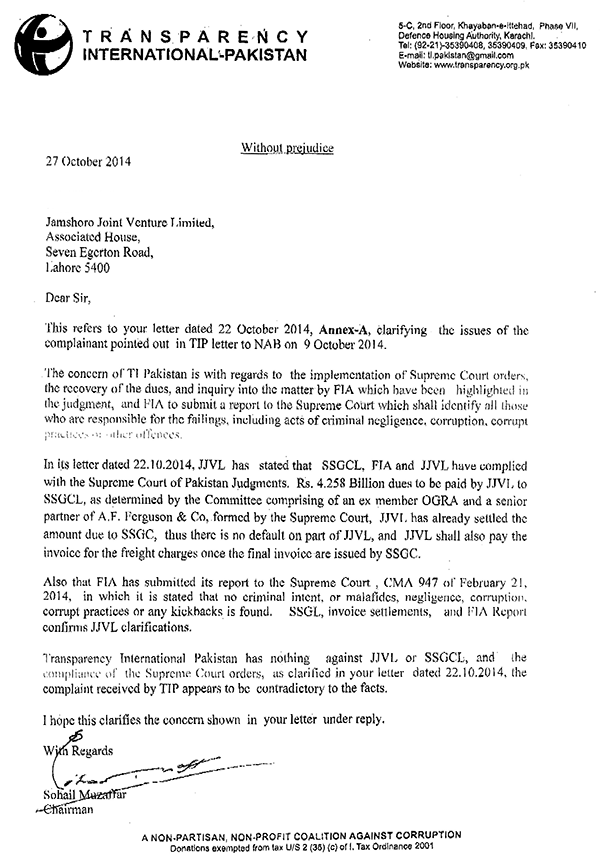